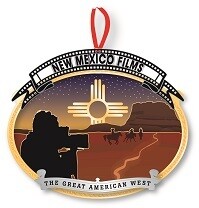 New Mexico has a proud history connected to the land— agriculture, livestock and the breath-taking beauty of the Land of Enchantment’s natural terrain, all play roles in the ranching and farming industries that helped to build the state into what it is today. Additionally, the state is world- renowned for its film industry, which dates back to 1898, when Thomas Alva Edison produced a short film entitled “Indian Day School” shot at Isleta Pueblo. From these humble beginnings, New Mexico has achieved great success positioning itself as one of the top places to produce western-themed films, with the state’s natural beauty also used as a stand-in for many other states. Some of the well-known films with Western themes include: “The Cheyenne Social Club” (1970), “The Cowboys” (1972), “Silverado” (1985), “3:10 to Yuma” (2007), “True Grit” (2010) and “The Ballad of Buster Scruggs” (2018).

To depict these essential strands of state history, The New Mexico Governor’s Mansion Foundation partnered with the New Mexico Film Office to produce an ornament design contest that would promote the state’s history of film production and ranch culture. Along with the backing of the Office of the Governor and the Economic Development Department, the contest was fashioned using the theme “New Mexico Films the Great American West.” Of the many wonderful designs submitted, the top five were awarded educational grant funding. The winning design was created by Carrie Dada.