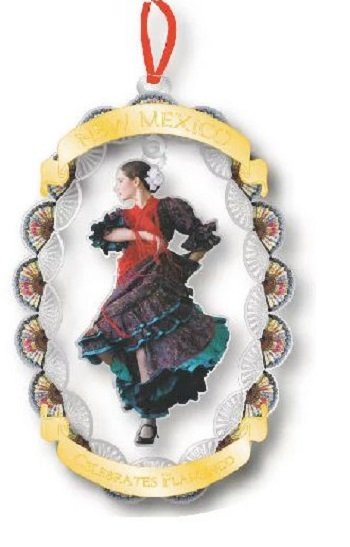 New Mexico has played a great role in the development of the art of flamenco in its modern form. Due to New Mexico’s own fascinating history as being a confluence of many converging—if oft-times warring cultures—the state is perfectly suited to being synonymous with flamenco. New Mexico’s famous fusion of cultures and influences has taken something that began around gypsy campfires of Europe before travelling abroad and into court performances before the royals, into something that is accessible and relatable for everyone. With its roots in many types of folk dance, flamenco is now ready to command the grand stages of the world.

The subject of the Flamenco Dancer ornament is New Mexico native Emmy Grimm, known as “La Emi.” She was a protégé of renowned dancer María Benítez, and is now a powerhouse artiste in her own right. La Emi has danced and toured throughout the world, including training under Carmela Greco of Spain. La Emi has opened her own school, EmiArte Flamenco Academy, a professional company EmiArte Flamenco, and a youth company, Flamenco Youth de Santa Fe. The New Mexico Governor’s Mansion Foundation is proud to present this exquisite design, one that demonstrates the state’s unique connection to a proud and ancient art form.

Save this product for later